I'm producing miniature physical releases of Low Mem Sky (my attempt to "demake" No Man's Sky),
as a THANK YOU to my supporters on Patreon. 🙏 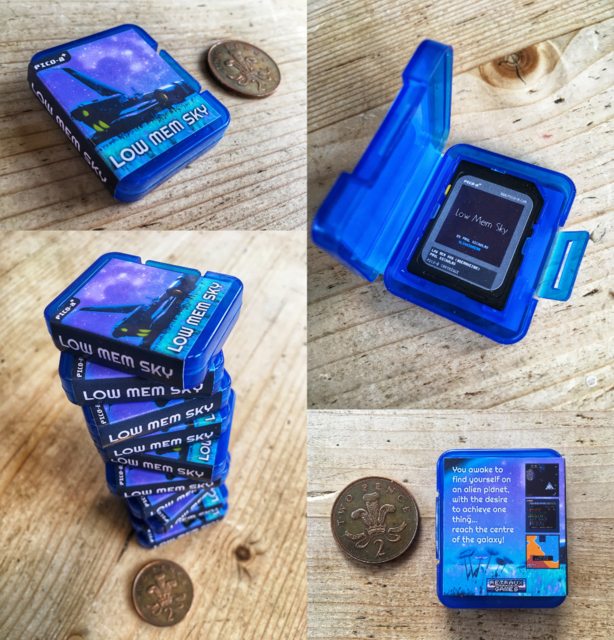 I not sure, but I think this is the first time anyone's tried (bothered? 😅) to create a "physical" release for a PICO-8 game.

That's awesome. Now all someone needs to do is make a console for it.

Maybe in that pocketchip console thing?

But for now, you can play it on ur computer (assuming you have an SD memory card slot!)

*One day we will have a legit PICO-8 console (hopefully)

Thanks @arashi256 😊
Yeah, thought I'd better include it here also - as not everyone uses Twitter (and understandably so!)

I just thought: how many bytes is the PICO-8 software? If we can fit it on a flash drive we may as well have our console. And maybe the flash drive could have a slot for one of those SD cards above! (Sadly PICO-8 games would get a little... expensive this way, since it's physical)

*Actually, 4imprint says they have 256 MB flash drives for about $5 each, so it's cheaper than what PICO-8 is now.
What everyone might want right now might be... an NES Classic style console? ( ͡° ͜ʖ ͡°)

@Skulhhead1924 Go for it! 👍
I plan to do a write-up of how I put this together soon, so others can make their own ones. 😉
#Pico8PhysicalLibraryFTW

Get ready for a handful of people trying to buy a lot of make-your-own stickers (like... those Avery things?) and a bunch of SD cards, and then only selling them that way.

But yeah, that would be cool.
Like getting a flash drive for SD cards, and it's got "PICO-8 SD Port" on it or something like that

You have to bold the hashtag so it's not big. lol

I did some searching around and to make a physical copy of a PICO-8 game, the worth of it has to be around $5 or so with the amount it costs for 1 SD card, a SD card case, and a label for the SD card. (Much cheaper than a Nintendo Switch game.)

In fact, if everyone just switched to an SD card format (with proper encryption) games could cost less to make physically!

hey i like the idea of cardriges a lot ibuild some pico8 consoles with raspberrys and was thinking of giving them away
but the problem is that it alway needs a complete pico8 software(with editor and stuff) if i had a wish i would wish for a method to render out pico 8 software for raspberry(linux arm) then it would be possibel to build a micro os that only plays one card ...like roms and it would be on sd.... and i hope all will look so nice like this one...love the game

Oh... There was/is a physical console... More a handheld: The Pocket C.H.I.P.!
They seemed to be unavailable for some time, but I found a current distributor, it seems:
URL Pocket C.H.I.P.

What about a PICOtendo Entertainment System?

@rmueglitz You can now create "Raspberry Pi" binary exports for games in PICO-8.
So, if you do this for your games - you would not need to "full" PICO-8 for every machine.
Just whatever minimal RPi linux distro takes your fancy + your binary exports.

@Liquidream So if someone made a special OS for a Pi, it could literally just be a PICO-8 and not anything else?

(Basically they would make a PICO-8-type GUI that runs a selected game.)

thanks for the hint somitimes i overlooking thing i only exportet on pc never on raspi...cool

the next would be to make an minimal os to just boot one cart i tried with tiny core but im not skilled enouth it gives me an error about libbcm ....don't know
i found a tic 80 project but for pi2 and for tic...not pico(wich is mutch better:-))
a bare sythem to boot one cart... enybody an idea maybe should write a new post
thanks again for the hint

@rmueglitz No probs. Also, if it helps, you should be able to create RPi binaries on ANY machine, not just the Pi (as of the latest ver of PICO-8, ofc).

Good work, I'm glad someone did this as well. I actually have plans to make games for pi that boot straight into the game like a real cart. :) There's tutorials around for this already...i.e. a boot script that goes right into pico8 cart (exported or otherwise) and when you shutdown pico8, it shuts the Pi off.

@merwok he made them ;). They were made for Patreon subscribers.

Should have been more explicit: where you found the SD cards with boxes? (The sticker and cover are custom, but I assume the boxes were bought in bulk, not 3D-printed)

@merwok:
Firstly, thanks for the kind words.

Secondly, as @YoshiK1 already pointed out (and as I stated at the top of the post), this was done as a gift for my supporters on Patreon.

If you took a moment to browse my Patreon, you'd have seen that I later followed-up this "announcement" post with a complete step-by-step of how I made these - even including links to suppliers.
(I didn't have to do this but wanted to do so to give back to the community - plus I'd love for others to create their own "Pico" carts) 🤓

Thank you for the details!